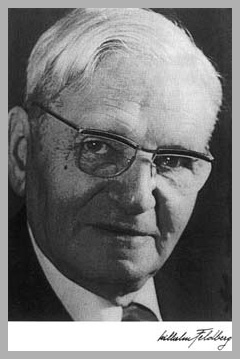 Professor Feldberg was born in Hamburg in 1900 and went to school there. He studied medicine, pre-clinical in Heidelberg and clinical in Munich. During his last years of study he started research at the Physiological Institute in Berlin, during his holidays.

After qualifying in 1925 he married the daughter of art critic Karl Scheffler and then went to England for two years to work under the late Professor Langley. Subsequently he worked under the late Sir Joseph Barcroft, and then under the late Sir Henry Dale. He became a Privat Dozent at Berlin University in 1930, and when forced to leave in 1933 was invited by Sir Henry Dale to work with him at the National Institute for Medical Research, London.

In 1936 he went on a grant to the Walter Eliza Hall Institute in Melbourne, Australia and worked in the department of the late Charles Kellaway. In 1938 Professor Adrian, later Lord Adrian, offered him a Readership in Cambridge, and from 1938 to 1949 he taught and did research there.

The Medical Research Council then established a new department for him at the National Institute for Medical Research, the Laboratory of Neuropharmacology. In 1978 the laboratory was closed down, and Professor Feldberg was awarded an MRC Grant to continue working in the Division of Physiology and Pharmacology, where he continued to work until the late 1980’s.

His early work mainly concerned histamine, acetylcholine and 5-HT. Whilst in Germany he worked on the role of the liver in histamine shock in different species. In Australia (1935-1938) he worked mainly on the action of snake venom. In Cambridge (1939-1949) he worked on the synthesis of acetylcholine. During his years at the National Institute for Medical Research his work mainly concerned pharmacological studies on the central nervous system.

Renowned both for his research and teaching, Wilhelm Feldberg’s research career of more than sixty years produced a prodigious output of 354 scientific papers.

In 1961 Professor Feldberg used the restitution money he received from the German Government, and the pension he was given as Emeritus Professor in Germany to establish the Feldberg Foundation.

Wilhelm Feldberg was renowned both for his research and teaching. A research career of more than sixty years produced a prodigious output of 354 scientific papers. His first work was on the pharmacology of histamine, particularly its effects on the circulation. As a young researcher in Berlin, Feldberg succeeded in identifying histamine in perfusates from isolated guinea pig lungs challenged with antigen, as well as a second substance called ‘slow-releasing substance of anaphylaxis’, later identified with the leukotrienes. These observations were crucial to the understanding and treatment of antigen-antibody reactions in asthma.

Feldberg is best known for his an outstanding contributions to one of the most fundamental concepts in physiology and pharmacology – that a nerve impulse is transmitted from the nerve endings of a nerve cell or neurone to a second neurone or an effector organ, such as a muscle, by the release of a chemical substance or ‘neurotransmitter’ into the intervening gap or ‘synapse’. This is the theory of neurohumoral transmission. The problem was to detect and identify the transmitter. As a young researcher in Berlin, Feldberg devised a method for perfusing organs through their arterial blood supply, and measuring acetylcholine in the perfusate collected during electrical stimulation of the nerve. In Berlin, and in later work with Dale and his colleagues at the National institute for Medical Research (NIMR) at Hampstead, Feldberg used this technique to establish acetylcholine as a neurotransmitter at several important sites in the peripheral nervous system and at skeletal muscle. Feldberg and his colleagues were even able to measure the actual number of molecules of acetylcholine released by a single nerve impulse. Feldberg also studied the enzymes involved in the synthesis of acetylcholine (‘cholineacetylase’) and its breakdown in the tissues (‘cholineasterase’). Cholineacetylase was detected in extracts of brain and gut, and the distribution of this enzyme in the central nervous system was used to define ‘cholinergic’ and ‘non-cholinergic’ neural pathways. During World War II, Feldberg demonstrated that the toxic effects of war gases were caused by an action that suppressed some cholinesterase action.

One of Feldberg’s favourite aphorisms was ‘die Methode ist alles’ (the method is everything), and nowhere is this better exemplified than by his ‘pharmacological approach to the brain’. To circumvent the ‘blood-brain barrier’ which prevents access of many drugs to the brain and to exclude peripheral systemic effects, he perfected a method for injecting drugs directly into the ventricles. Using this technique, he defined the site and mode of action of several important drugs in the CNS. With his co-workers, he was able to show that prostaglandins produce fever by acting on a temperature-regulating centre in the hypothalamus; and demonstrated that drugs such as paracetamol, which reduce fever, do so by lowering the level of prostaglandins in the brain.

In other important work, he elucidated aspects of the control of blood sugar, blood pressure, and the release of the hypothalamic hormone, vasopressin, which is important for the control of fluid balance in the body.

Feldberg’s research gained international recognition. He was elected to the fellowship of several scientific societies and awarded a number of honorary degrees both at home and abroad. His final accolade was the award of the Wellcome Gold Medal of the British Pharmacological Society.

Feldberg was an inspired teacher. During the tenure of his Readership in Physiology at Cambridge from 1938 to 1949, his lectures, and particularly his practical class demonstrations, were highly acclaimed by his undergraduate students. He had a genius for collaborative work. In 1949 he became Head of the Division of Physiology and Pharmacology at NIMR which had then moved to Mill Hill. It attracted a succession of aspiring young postgraduates from all parts of the world. Each would in turn be recruited to Feldberg’s newest research project and gain enormously from his teaching.